Test cases are used to automate the marking of student code submissions.

There are four types of test cases, which are described below. By default, all test cases are  Validate test cases. This is the vast majority of test cases used on Grok.

Enabling other types of Test Cases

By default, all test cases are  Validate test cases. You can enable the other types of test cases using the Show Advanced option on the Problem, see screenshot below.  Then change the Test Case Type to one of the below types.

By default, all test cases are  Validate test cases. See above for how to enable other types of test cases.

What's the practical difference between Validate and Suggest test cases?

With test cases, what Grok envisions is that one would set an appropriate minimum acceptance criteria using the Validate test cases (e.g. Is the output format correct? Does it pass the example input/output pairs in the problem description? etc). One would use the Assess test cases to test for harder or more nuanced cases. The idea being that students who pass more Assess test cases will achieve higher marks.

Generally we (Grok) assume that any student who passes the Validate test cases will receive a passing mark for this assessment. That's not a requirement, of course. But it's our recommendation, and how the system was designed to work. That's also not to say that you can't still assess the students who don't pass all the Validate cases - you absolutely can assess their submissions and assign them a mark.

The friendliness options only apply when using the Differ checker. They are set in the following interface:

Sometimes it's useful to group up tests, and only allow subsequent tests to be run if the all tests in a group are passed. By default, all members of a test group are run, regardless of whether other members of the group fail.
An example suite of tests might look like the following:

To achieve this, put the second set of tests into a group.

To form a group, simply ensure they are part of a continuous sequence (for instance, tests {#2, #3, #4, #5} would be valid, but {#2, #4, #5} would form two groups), and give them each the same string in the Group field within the test options. It helps to use a meaningful string, e.g., "Edge cases". If you do not specific a test group label, each test is treated as being in its own group of size 1. 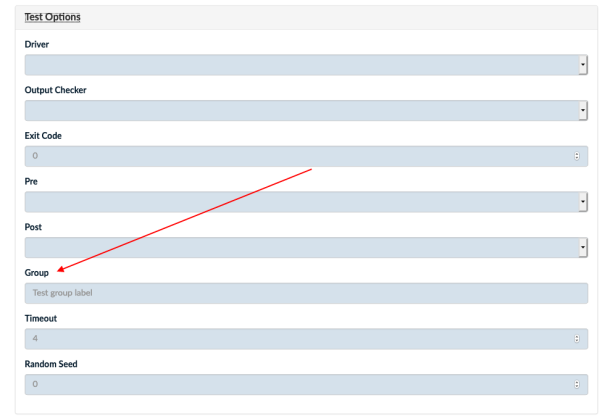 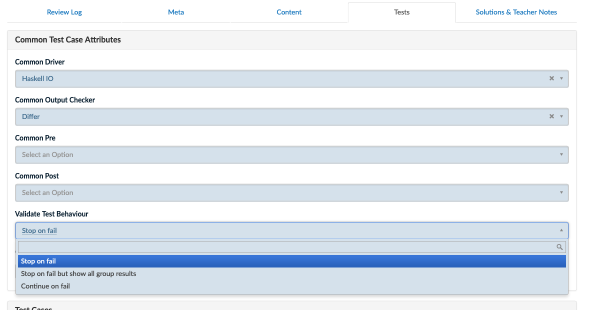