How do I use Grok's plagiarism detection system?

This rest of this page explains how to use our internal tool.

In order to compare two workspaces, the following steps are performed:

The tool uses our own implementation of the k-gram winnowing algorithm used by MOSS, as described in the SIGMOD 2003 paper.

Document normalisation of source-code requires syntax-aware processing of the parse-tree. This is complicated when the document is not valid code, due to syntax errors. Our tool features a fall-back that handles such cases to ensure that, in the worst case, two identical documents that are syntactically invalid are still identified as completely similar.

For some Grok problems the student is provided with some initial scaffolding/skeleton code to get them started, which would lead to all code having some base level of similarity. We handle this by allowing such bootstrap code to be specified to the similarity checker so that it can be ignored . Read-only files in the workspace are also excluded from comparison to avoid trivial similarities.

Our tool generates reports for all submissions to a specific problem in a course.

Depending upon the number of comparisons required, this report may take a few minutes to complete. When ready, the status will change to "Success" in the list of generated reports.

There are 6 parameters for the tool that can be altered from their defaults prior to creating a new report.

These parameters are very specific to the implementation, and we recommend that you keep to the default values unless you have good reason to do otherwise. You should also consult the winnowing algorithm paper to properly understand the function of each parameter. Note that there is no setting that will guarantee detection of plagiarism: the tool will identify similar documents according to the parameters, but the user must judge through manual inspection whether this is due to plagiarism.

If you click on an entry in the list of generated reports, you will get a list of all comparisons between two students' code. By default this list is restricted to just those that include the final submission from at least one of the students. 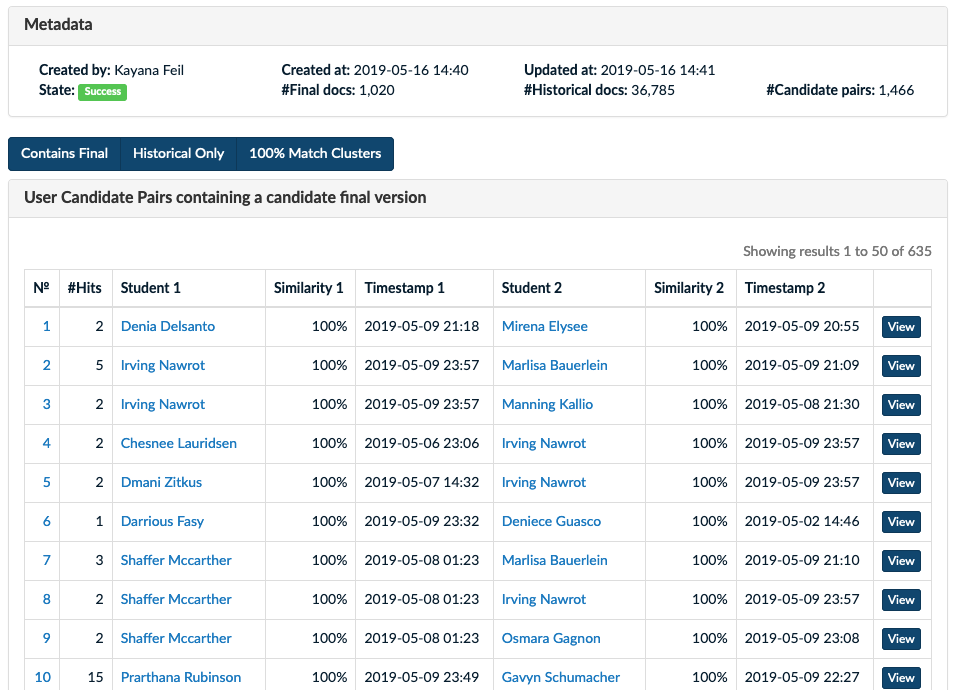 This view lets you inspect the code side-by-side.

In the left-hand panel you can see the full code history for both students, ordered in time. This includes passing submissions (green), failing submissions (orange) and saved but not submitted code (blue). High-similarity pairs are joined by black lines, and are the plagiarism candidates. Since the entries are ordered reverse chronologically from top to bottom, you can get a sense of when someone might have copied code from someone else.

In the right are side-by-side comparisons of the selected code history items. In the example shown above, the most recent submissions for each student are shown. The regions of high similarity are highlighted - there's just a single region (in pink) but in more complex cases there can be multiple regions, coloured separately. Note that these regions are approximate, since they correspond to locations in the normalised code rather than the those in the original form shown.

You can see that the final submission for the first student is very similar to all of the second student's attempts, suggesting potential plagiarism by the first student. This seems more likely when you see how different the earlier attempt was:

In fact, the first student appears to have taken a different approach for the previous 5 items in the history, with only slight similarity of two fragments to the second student's code. Student 1 then appears to copy Student 2 (including variable names) after this approach has been shown to pass all tests.

As another example of a common form of plagiarism, the case below shows similarity between two students' in the history, even though the final submissions are very different. In this case it appears that Student 1 copied Student 2's working submission verbatim, and then modified their code to be different. In this case the final approach is very different, with no use of lambdas, but commonly a student may simply edit the code to be cosmetically different while preserving the semantics - in such circumstances the measured similarity changes little.

In contrast to the default "Contains Final" listing of code pairings, the "Historical Only" view lists candidate pairs containing matched only the the historical versions. This captures examples where students may have started with a common example from another source (e.g. a StackOverflow answer), and then made modifications. The table columns are the same as above.

The third listing, "100% Match Clusters", groups together all students who have a 100% similar item in their save history. This allows you to identify common approaches to the problem, or groups of students sharing different solutions. Students are grouped by cluster, and you can select two students within the group to compare in the Code Comparison view.